Property Damage – Ever wonder which states are considered the safest or most dangerous to live in when it comes to natural hazards?

Well CoreLogic, a company that typically maintains title data for US homes, has crated a rating tool and listed the states in order from the most hazardous to the least hazardous with Florida topping the list of the States at Highest Risk of Property Damage Loss and Michigan at the bottom with the lowest score. The score is based on a 0 to 100 scale.

A host of natural disasters including flood, wildfire, tornado, storm surge, earthquake, straight-line wind, hurricane wind, hail and sinkhole were taken into account. Areas within the states with higher risk levels have a higher score, while states with areas that have a lesser likelihood receive lower scores and commercial as well as residential properties were considered during the assessment.

Florida tops the list mainly because of it’s historical,and assumed continual, hurricane wind related damages. Florida’s extensive coastline also added to the possibility of water surges and rising ocean levels. sinkholes, flooding and wildfires are all to common occurrences in Florida already. Michigan, by contrast, ranks the lowest with flooding being the only concen in that state.

The proprietary calculation created by CoreLogic weighs heavily upon the probability of a future event,  based upon historical information. Hawaii and Arkansas were left out of the list due supposedly due to limited risk data. 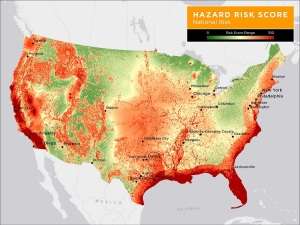 CoreLogic hopes that the data will be used to help with disaster recovery planning, management company assessment of property holdings, default analysis for mortgage lenders and general ability to determine “good risk” properties.